There were three different lines of air defence constructed in Canada during the Cold War.

The Pinetree Line was the first to become operational, during the 1952-1953 time period and it was, more or less, centered on the 50th parallel – with a section covering southern Ontario, and another extension covering the Labrador coast – going as far north as Frobisher Bay. The Pinteree Line was composed of 44 long range radar stations, and six USAF manned Gap Filler radar stations. Some of these locations had a very short operational life – while others remained operational for more than 35 years.

This web site is dedicated to the thousands of Canadian and American military and civilian personnel who served at any of the Pinetree Line radar stations and we have, with the assistance of hundreds of people like yourself, managed to recreate a great deal of what was an accepted way of life during the Cold War.

But what about the other two lines of air defence? What were these, and how did they fit into the overall scheme of things? 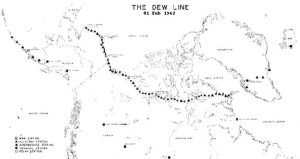 The Distant Early Warning (DEW) Line began on 15 February 1954 when President Eisenhower signed the bill approving the construction. The DEW Line was designed and built during the “Cold War” as the primary line of air defence warning of an “Over the Pole” invasion of the North American Continent. The actual construction of the 58 sites took place between 1955 and 1957. Many tons of supplies and equipment were moved to the Arctic by air, sea and river barge. One such carrier, the USAF 62nd Airlift Wing, moved over 13 million pounds of materiel in this monumental effort. The DEW Line was declared fully operational on 31 Jul 1957. The DEW Line was centered along the 70th parallel. It was the first line of air defence for the North American Continent.

The DEW Line was centered along the 70th parallel. It was the first line of air defence for the North American Continent.

Each DEW Line Main and Auxiliary site (located at roughly 100 mile intervals) had the FPS-19 search radar as the prime surveillance tool. With a 160 mile range there was good overlap with adjacent sites. However, given the doughnut pattern swept by the beam there were “gaps” in the hole of the doughnut directly over the station and under the “eaves” of the doughnut as it curved upwards. The latter were covered by the FPS-23 Doppler radar. With one exception, the FPS-23 transmitters were located at the Intermediate sites (their sole operational function) and the receivers at the adjacent Auxiliary or Main site circa 50 miles either side. The exception I mentioned was between FOX Main (Hall Beach) and FOX 1 (Rowley Island). There was nothing but water between these two but they were only about 60 miles apart so, in addition to receiving FPS-23 signals from the West (CAM 5), FOX Main also transmitted FPS-23 signals East to FOX 1. Other than that anomaly it was as I described above.

Control was available in both the sense of normal ATC civil control and in the area of “Intercepts”. The FPS-19 had a 48 sec sweep = 1.25 rpm and, hence was strictly a surveillance radar.

Given the slow sweep, ground clutter (significant to nil depending on site location) and the fact that closeted in the surveillance room the operator had no sight of the runway (or anything else) we were classed as radar advisory rather than radar control. So we could advise aircraft of the location of other traffic etc but it was up to them what they did about it.

There was no Intercept Control on the DEW Line. Our job was strictly surveillance. Any unauthorised incursion of the DEWIZ would be in NORAD within a minute and with that we would have done our job. The only thing left to do was sit back and watch developments. Having said that, if still operational, we could obviously vector aircraft to targets but all in very slow motion. Keeping up with a flight of CF-100’s whizzing about would have been optimistic indeed. A mere 6-8 DC3/C46’s nipping in and out of Hall Beach during the Fall airlift was quite sufficient to keep one on one’s toes. Our understanding was that the northernmost strips capabable of handling fighter aircraft would have been Frobisher and Churchill as these were the nearest paved ones. The conclusion we all drew was that, if there was to be a conflict, no Soviet Bear bomber would bother wasting its load on us. If he had got as far as us he was on a one way trip anyway and the action would commence well down into the Mid Canada Line area. Happily, this remains unproved one way or the other. 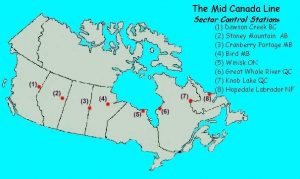 Sandwiched between the DEW Line and the Pinetree Line, the Mid Canada Line (MCL), also known as the McGill Fence was a series of military sites designed to function as the second line of detection. Its purpose was to detect enemy aircraft that had penetrated south of the DEW Line into the heart of North America. This system operated on the “Doppler” principle. Conceived during the “Cold War” in 1951 it wasn’t until January of 1958 that the line became fully operational. The MCL sites were strategically located along the 55th parallel from the Alaska border to the Atlantic Ocean. At its peak, it consisted of 8 Sector Control Stations and approximately 90 unmanned sites about 30 miles apart. With the 1960’s came improvements in technology and jet aircraft design in particular which rendered the MCL no longer economically feasible or strategically required, so it was shut down. The western sites were decommissioned in January 1964 and the eastern sites in April 1965.

Pinetree Line web site comment: – The sole purpose of this page on our web site is to advise you that there were three lines of Air Defence during the 1950s and 1960s. We encourage you to link to Larry Wilson’s excellent web site for additional detail pertaining to both the DEW Line and the Mid-Canada Line.