Under Orianna Brodbeck’s dream house, a site of cultural and historical significance

Standing outside the historic Thomas Pargeter home, you would never guess what lies beneath the rustic farmhouse — and at the height of the Cold War, that was exactly what Toronto wanted.

After the failed Bay of Pigs Invasion of 1961, mounting fears of the city falling under attack were at an all-time high.

By January of the next year, the city had a fully operational secret bunker built more than 50 kilometres away in northern Aurora, its whereabouts known only to a select few.

The Metropolitan Toronto Emergency Preparedness Centre was meant to be a site where city officials would meet to plan the next steps in the event of an attack. But decades passed and the centre was never put to the test.

The farmhouse was at times used as an office space, often with a single employee working in solitude. It later served as a training facility for the Toronto Police Service.

The city decided in 1992 it could no longer justify the high costs of maintaining the site. It put the property up for sale and, while offers flooded in, it was four years until the city approved an offer.

For Orianna Brodbeck, it was love at first sight after she spotted a listing in the paper and decided to ride her bicycle over to check out the property. It looked like a charming farmhouse from the outside, but with boarded-up windows and bulletin boards lining nearly every room of the house, it took a willing imagination to see the space’s potential as a home. 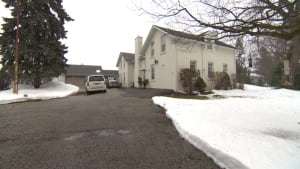 Under this Aurora home lies a historic bunker from the Cold War era. (CBC)

When Brodbeck and her husband, Werner, took a tour with a real estate agent, what lay hidden deep below the backyard garden was a surprise to everyone.

“None of us knew why it was here or what it was for … The real estate agent who showed us through was from Toronto and he had no idea,” Orianna said.

What they walked into that day was an expansive shelter fortified by concrete and steel. Immediately noticeable were the three towering boards at the end of the room displaying intricately hand-drawn maps of the GTA and southern Ontario.

Military bases like Camp Borden in Simcoe County were clearly marked. And lists ready to be filled with the numbers of casualties and radiation levels in different sites lined the walls of the room, conjuring haunting images of wartime.

What might have scared away some, only served to pique the Brodbecks’ interest, their curiosity evidenced by a weighty pile of old photographs and documents gained through freedom of information requests that the family has collected over the years.

“It harks back to an era most of us didn’t really live through,” said Werner. “I’d like to make sure it lasts and stays.”

As a history graduate from the University of Toronto, Werner says his passion for the past motivates him to do what he can to preserve the heritage site, but with mounting costs and the need for constant repair, the Brodbecks would welcome any help from the city in maintaining a piece of its history.

The Town of Aurora has afforded some protection to the house, registering it as a site of cultural and historical significance, but the town’s Director of Planning and Development Marco Ramunno says that designation doesn’t involve maintaining the property.

“Because it’s on a register, if an owner wanted to demolish it or change the structure significantly, they would need to approach the town and submit a heritage permit,” Ramunno said. He added that the town would likely intervene if there were any plans to destroy the bunker.

For now, the Brodbecks are happy to keep up with the maintenance of the bunker for as long as they can. “It’s still kind of sad they haven’t decided to preserve it,” Orianna Brodbeck said. “The ’60s might not sound that long ago, but it’s still a part of our makeup.”