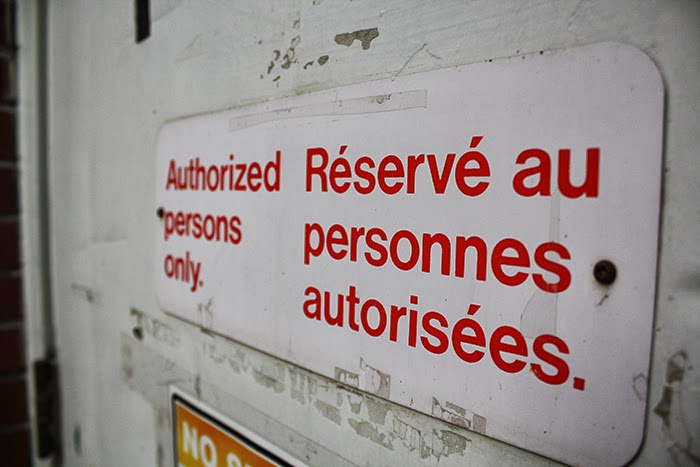 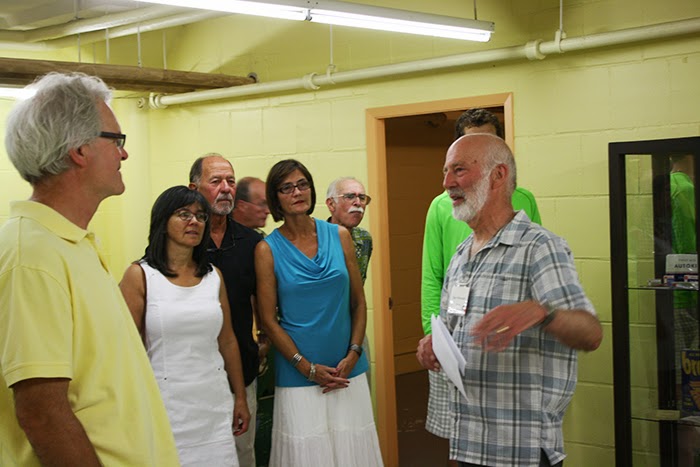 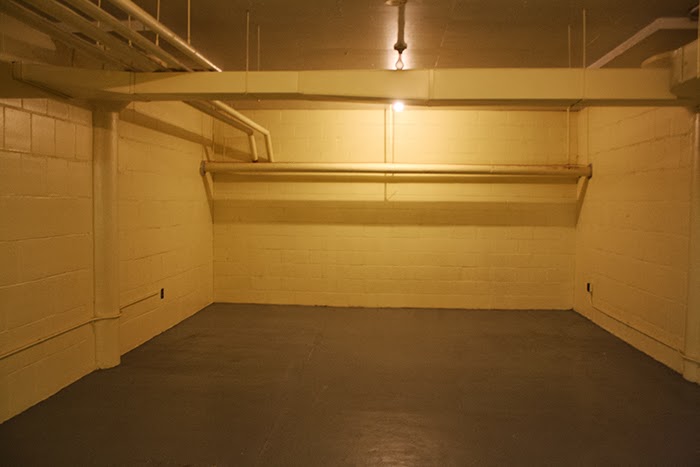 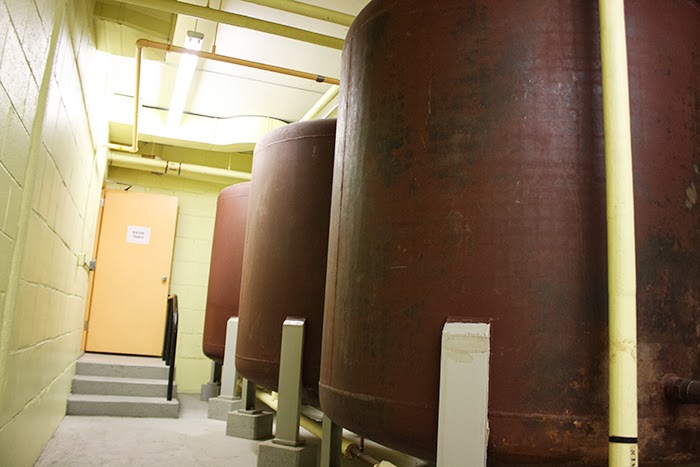 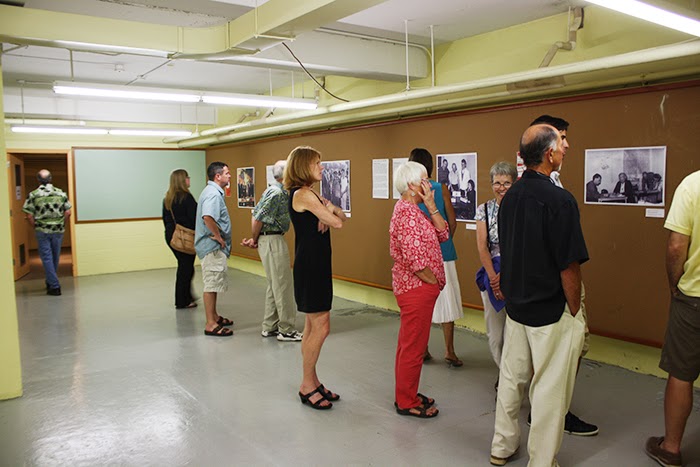 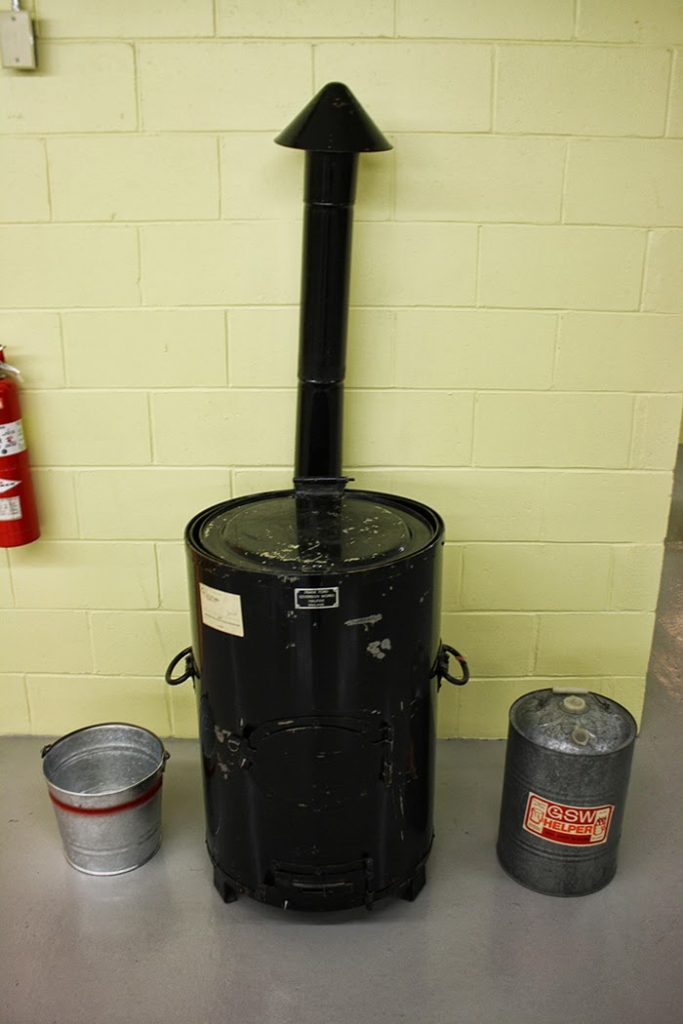 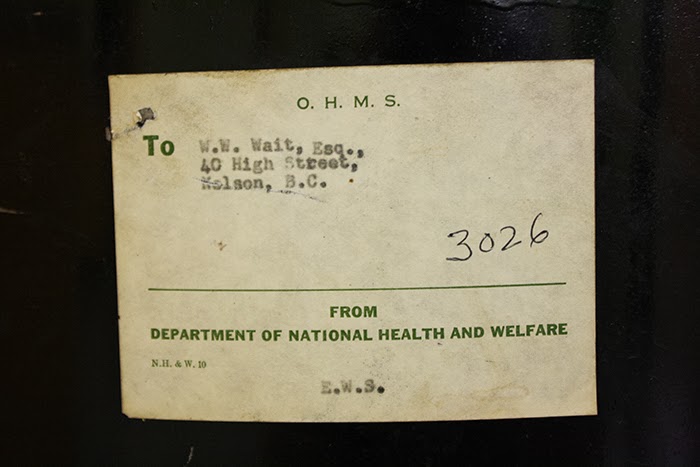 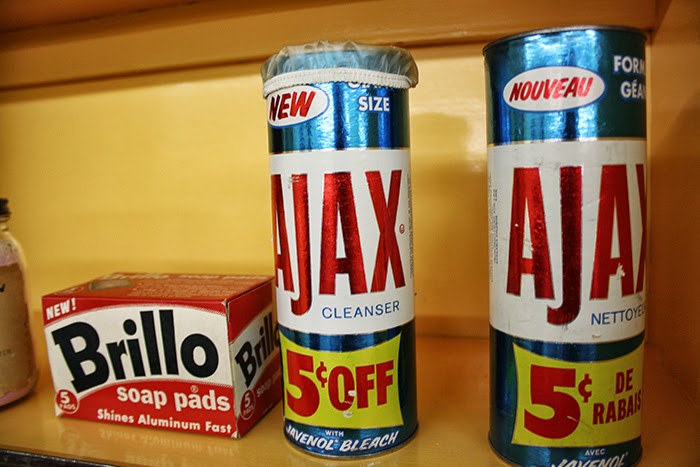 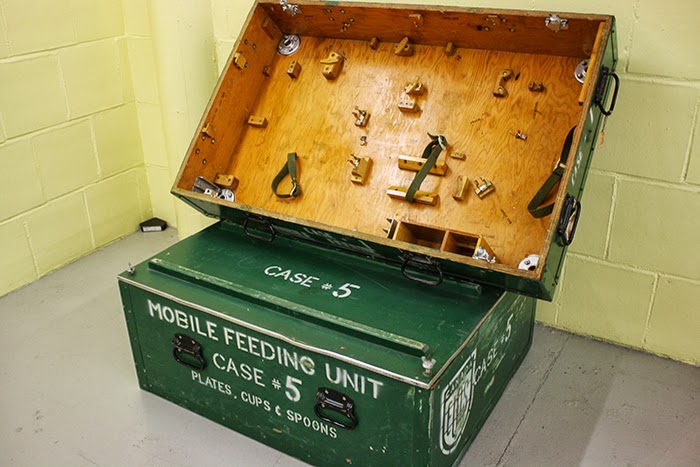 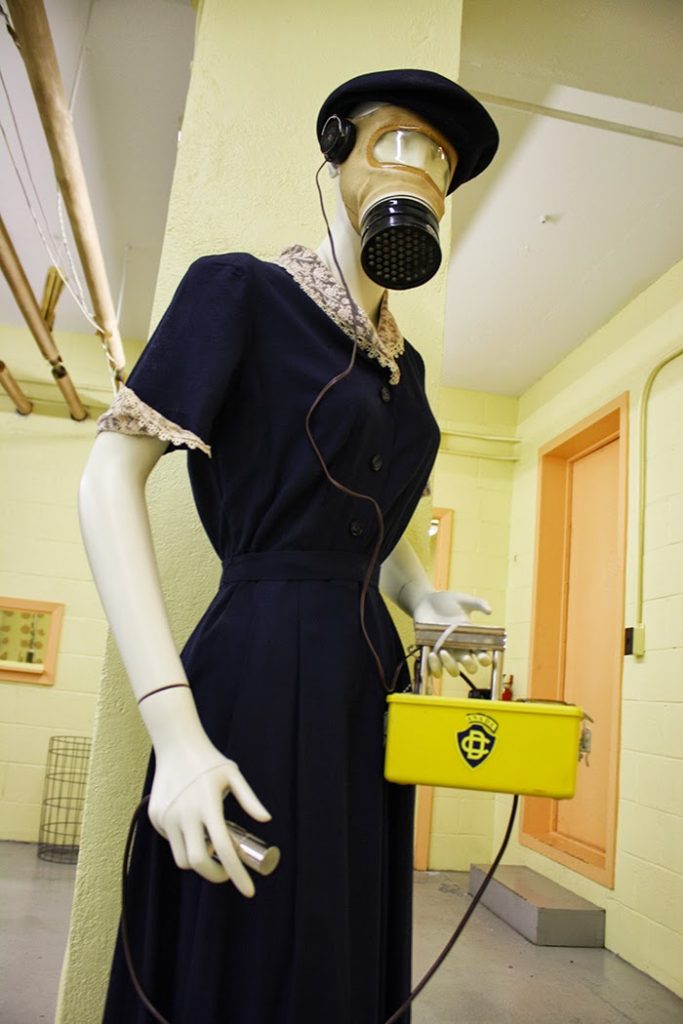 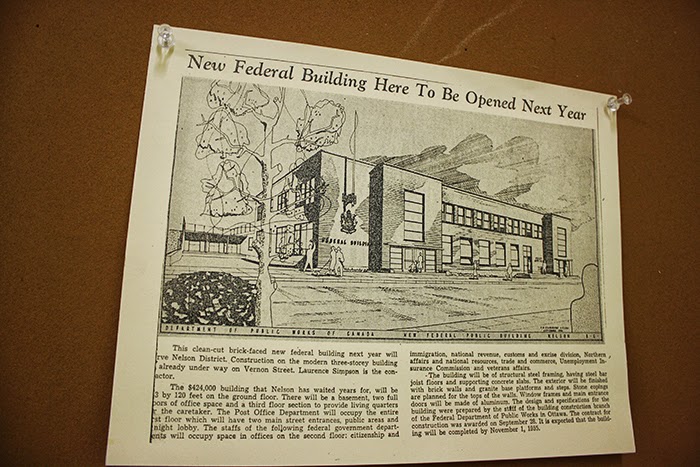 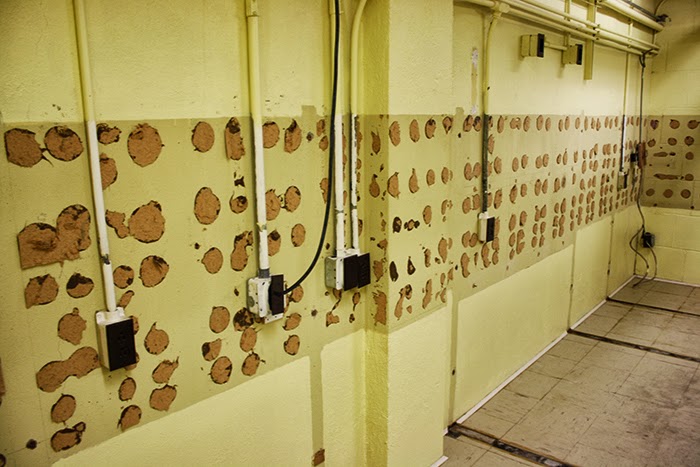 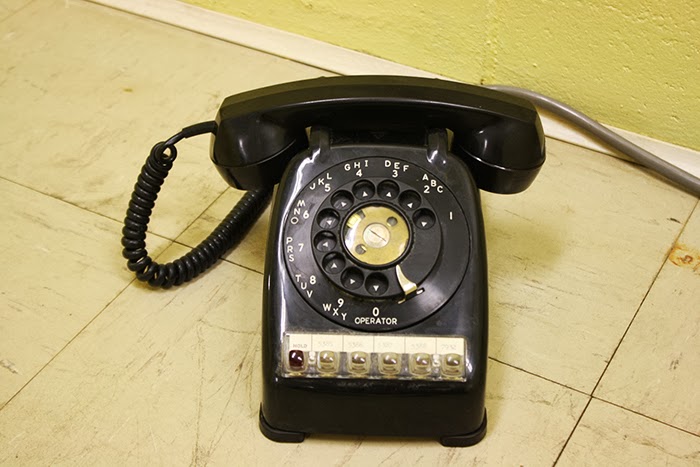 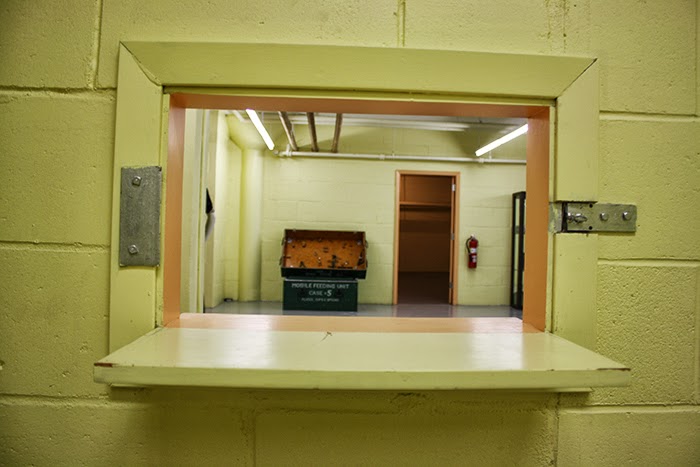 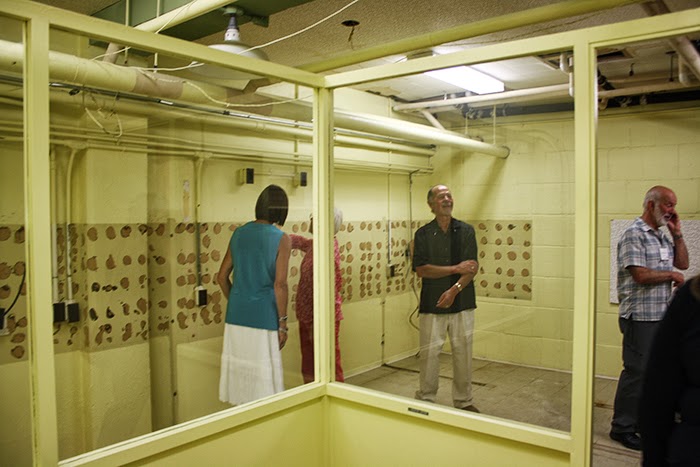 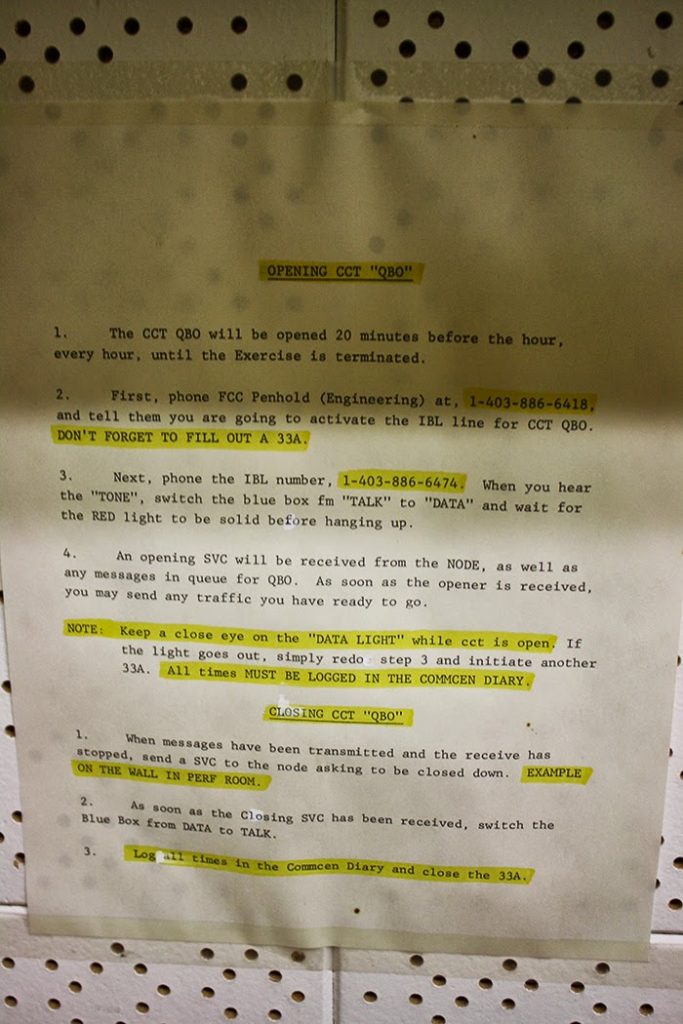 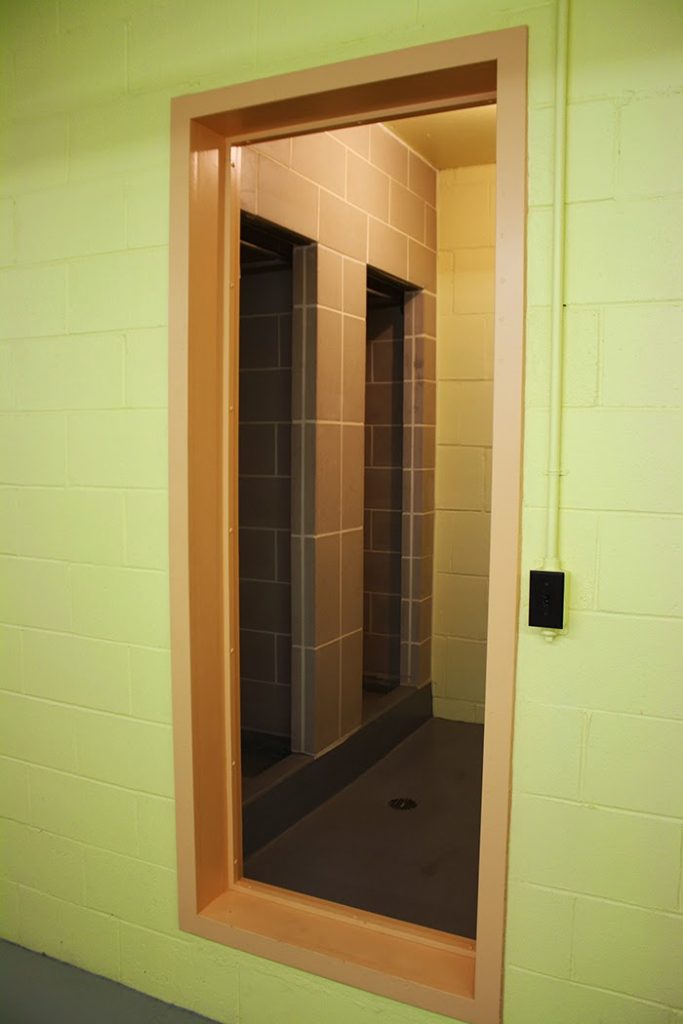 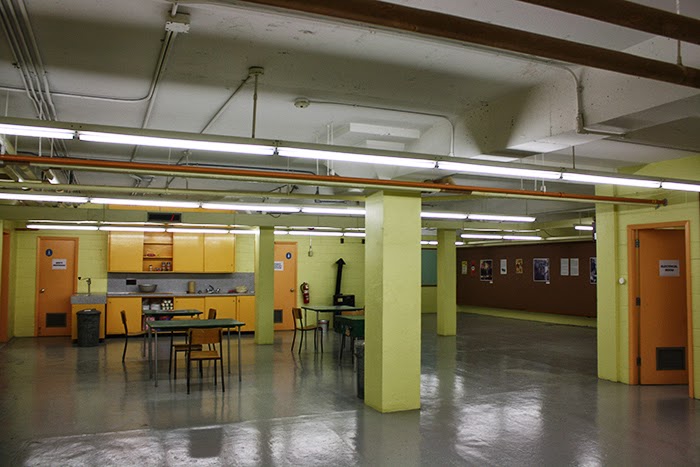 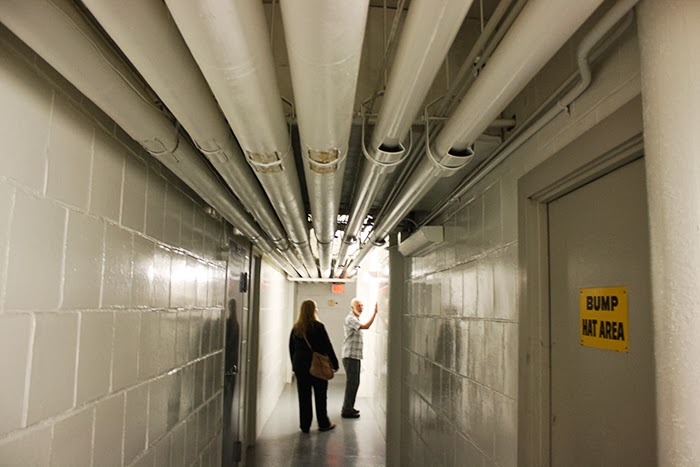 Some 50-odd years after it was built, a Cold War-era bunker in the basement of the Gray Building opened to the public for the first time Saturday as part of a Touchstones Nelson fundraiser.

The large, well-lit space was intended as a fallout shelter where officials could hunker down in case of atomic war or other crisis, but never used.

It was one of many Civil Defence headquarters across Canada. Nelson’s was of the local civil defence organization.

One person guaranteed a spot in the bunker in case of emergency was Alan Ramsden, then manager of the local radio station, who was expected to broadcast information to the public. He saw the facility once shortly after it was built, but has never been back.

“There was a preliminary tour for a few of us who were going to be assigned to go there,” he says. “There would be the mayor, of course, and the government agent. But nobody’s family, so a lot of us might have refused.”

As the next closest bunker was in Kamloops, officials from Trail and other Kootenay centres would have also stayed there, Ramsden says. He figures it could have accommodated about 20 people for at least a month.

But he was sworn to secrecy about its existence: “We pledged not to talk about it. Otherwise a lot of people would have said ‘Why are they in there and not me?’”

The federal building, named for Lt. Robert Hampton Gray, opened in April 1956, but it’s unclear when the basement was converted into a bunker. Diefenbaker didn’t come to power until the following year.

“After the post office was built, Laurence Simpson, the contractor, suddenly appeared and put steel gratings in front and fancy rock slabs on the roof,” Ramsden says. “People didn’t know why, but that was all supposed to be anti-radiation. I’m not sure if they had lead underneath.”

A Nelson Daily News story from the construction period indicates those features were always planned: “The building will be of structural steel framing, having steel bar joist floors and supporting concrete slabs. The exterior will be finished with brick walls and granite base platforms and steps. Stone copings are planned for the tops of the walls.”

The bunker itself, accessed through an alley door next to Touchstones, consists of a decontamination room, which opens into a large central area with a gray floor, cream coloured doors, and pistachio walls.

There’s a kitchen with a big built-in can opener, washrooms, showers, men’s and women’s bunk rooms — although probably few women would have been afforded spots — three huge water tanks, an electrical room, and a radio room with a series of wall outlets and evidence of equipment having been ripped out.

A baffling typewritten memo taped to the wall reads in part: “The CCT QBO will be opened 20 minutes before the hour, every hour, until the exercise is terminated … Don’t forget to fill out a 33A.”

Within the radio room is a glassed-off booth with a little opening in the wall that looks out on the main area. A black rotary-dial phone sits on the floor.

As far as contents, there isn’t much else: just some paper plates and cups, plastic cutlery and a funny looking stove with a label indicating it was shipped by the Department of National Health and Welfare to Walter Wait, Nelson’s civil defence co-ordinator.

There’s also a locked wall safe. Who knows what secrets might be inside?

For Saturday’s tours, Touchstones staff created an exhibit on the bunker’s history, including a picture of Diefenbaker visiting Nelson in 1967. They supplemented it with 1950s and ’60s household items and “mobile feeding units” — large wooden supply cases found elsewhere in the building.

“The space itself is the same. All we did is clean it,” explains executive director Leah Best, who first toured it two or three years ago. “The washrooms and ventilation still worked.”

While the bunker’s existence is no longer secret, it still isn’t widely known. As the Cold War thawed, the post office used it for storage.

In a Facebook posting, Ryan McMillan writes that he had a temp job one weekend in 1994 to clean the place out. “I kept a couple of military issue wool blankets for a while but they are long gone,” he says. “It certainly had a Cold War feel, right down to the packages of dried eggs and milk.”

In 2000, the city considered acquiring the building for an art gallery and museum, which might have resulted in the bunker being turned into the archives, but council balked at the price. It sold to private interests instead.

Best says they’re interested in working with the owner to use the space for museum programming. “Our building doesn’t have dedicated programming space. There’s nowhere to bring large groups together comfortably. The owners have been incredibly gracious, and thanks to their good graces we have access.”

This past spring, Touchstones volunteers and board members got sneak previews but the weekend fundraiser was the first time the general public has been in the space.

“We’ve thought a bit about how to use it, but we’re still testing it out,” Best says. “We had a really positive reaction. Many people on the tour were children during that [Cold War] era, so it was nostalgic for them.”

Best said the sold-out event, which also included a silent auction, was “incredibly successful” and will help achieve their goal of bringing the famed Kootenay Lake powerboat Ladybird out of storage and back into the community. Consigned to the old museum on Anderson Street for years, it will soon be seen at local events on a new, modified trailer.