The History (And Controversy) Of North Van’s Air Raid Siren

YOU SHOULD KNOW: About The History (And Controversy) Of North Van’s Air Raid Siren 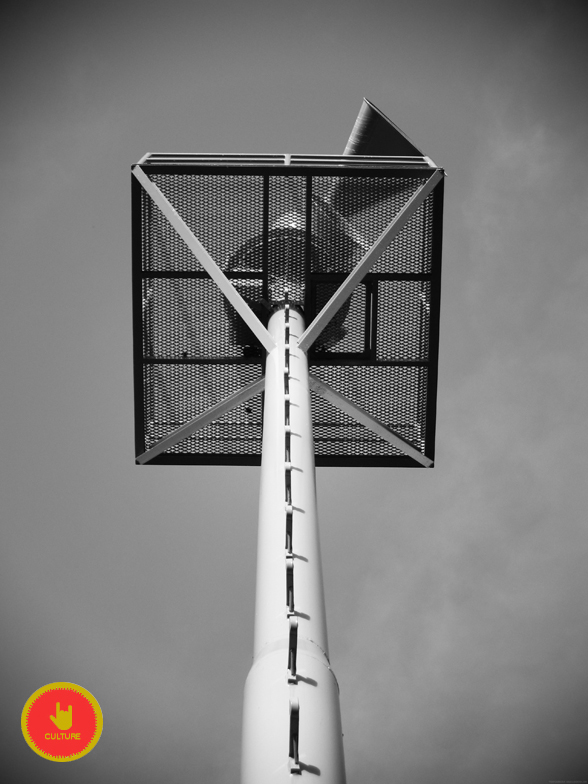 by Stevie Wilson | Contemporary Canadian notions of the Cold War often conjure up images of stern-voiced American politicians, missile crises, and foreign-language propaganda posters of impending doom (we know it’s Russian because they have those backwards Rs). Indeed, despite our city’s penchant for heritage promotion and preservation, an accessible history of our Vancouver’s civil defense efforts and politics during this period of immense fear and political anxiety is surprisingly hard to come by. Illustrating this point is the recent controversy surrounding the 1960s-era air raid siren in North Vancouver – a surprise to many who were previously unaware that one even exists. Heritage and history buffs might agree that this is – ahem – cause for alarm.

The city of North Vancouver’s decision to re-install a 52 year-old air raid siren in Victoria Park resurrected an interesting and complex dialogue between the people who lived through the Cold War (and are apprehensive about being reminded of it), and those which wish to monumentalize it. Built in 1960, and permanently de-activated in 1988, the last remnant of North Vancouver’s Cold War heritage was removed from its post in September of last year for repairs and maintenance, much to the relief of those who considered it a troubling relic of the anxieties of decades past. To others, the former harbinger of an inbound nuclear attack was, despite being a piece of our history, no more than a public nuisance. 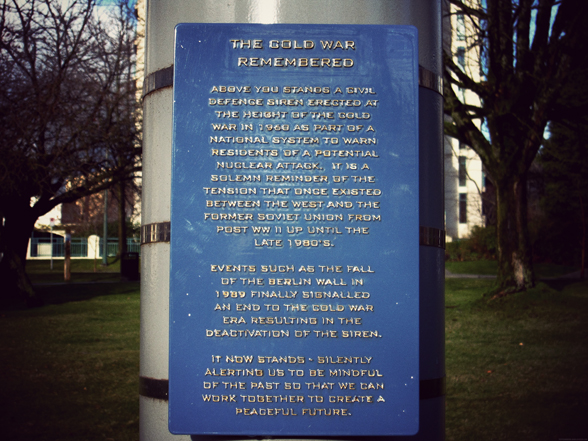 In keeping with Canadian national policy pursuant to the Soviet nuclear threat, sirens were installed nation-wide between 1952-1955 with accompanying streamline response instructions and routines for citizens. As a perceived target zone, Vancouver was additionally supplied with 56 sirens up until the year 1966. Featuring two unique alert signals – a “steady blast of three minutes or more” and the notorious “rising, falling note on sirens” (to indicate increasing immediacy of attack threat), the sirens were but one piece of an extensive civil communication strategy employed to educate and protect Vancouver’s growing urban populace. These sounds were identical to those of American defense policies – the result of a standardized North American initiative in the mid ’50s. In 1979, Alderman Gary Watkins launched a successful opposition to the sirens in the suburb of Surrey, which garnered much public support due to a severe issue with malfunctioning sirens and accidental siren soundings. With the anxiety and fear of impending nuclear attack decreasing with the advent of detente, the sirens had become taxpayer burdens and irrelevant eyesores.

In 1994, the North Shore Emergency Program utilized the precedent set by Watkins to call for the removal of the siren in Victoria Park. A federal removal initiative the same year began the task of alleviating the community of these weather-worn, defaced, and aging remnants of the past. North Vancouver citizen R.G. Scott subsequently headed a successful campaign to preserve this unique
piece of our Cold War heritage, leading to Council’s acquisition of the siren from the Department of National Defense.

The debate over the value of these sirens highlights an interesting caveat of heritage study and promotion: the worth of historical artifacts is always relative, and not necessarily what our leaders choose (or choose not) to designate. The objects may be as unsightly as they are unnerving, but they’re the only remaining pieces of our past that come with their own ring tone, and that’s got to count for something.

MORE THINGS YOU SHOULD KNOW

Stevie Wilson is an historian masquerading as a writer. After serving as an editor for the UBC History Journal, she’s decided to branch out with a cryptic agenda: encouraging the people of Vancouver to take notice of their local history and heritage with You Should Know, a Scout column that aims to show you the things that you already see. Just nod your head and pretend you’re paying attention.